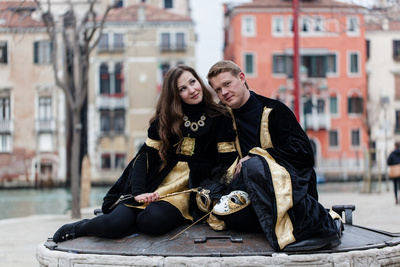 There are at least 600 wells in Venice: most of them can be seen in the middle of the squares while others are inside courtyards or gardens. The former were mostly public wells (even if they were often built thanks to the ‘sponsorship’ of rich families), the latter were private ones.

In most cases they were linked to an underground water tank where rainwater was channeled into after being filtered through sand. In other cases the wells got the water from the Brenta river, which was transported by ship.

The well’s section that can be seen from the outside is called “vera” in Venetian dialect and is the external element built around the well and protecting its upper part. It is made of stone, marble or metal. While strolling in Venice, you can still see a lot of them: some are very simple, others are richly decorated with reliefs representing plants, fruits, animals, birds, flowers, cherubs, shields of Venetian families, allegoric figures, moral instructions…

During my photo walks for engagement, wedding or honeymoon photo services in Venice, I had the chance to shoot some wells as backgrounds for my photo portraits. Find yourself further examples in my photo galleries!