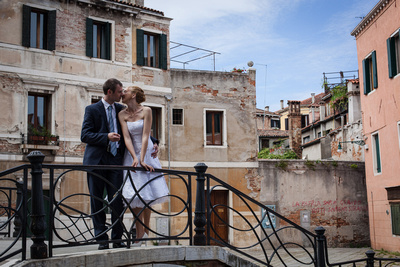 As a matter of fact Venice is made up of islands and bridges: about 435 bridges link 121 islands.

The first bridge you meet while approaching Venice is the so called “Ponte della libertà (Freedome Bridge)” linking Venice to the mainland and the city of Mestre.  It hosts the railway lines and a motorway.

If you reach Venice by train, just outside the railway station you will meet “Ponte degli Scalzi (Barefoot Bridge)”, one of the four bridges crossing the Canal Grande.

If you arrive by car you will probably cross the Constitution Bridge (Ponte della Costituzione), also called Calatrava Bridge out of the Spanish architect who designed it. The bridge, made of glass, Istrian limestone and steel, was opened on September 2008 and link Piazzale Roma (the single place open to cars in Venice), the railway station and the Cannaregio district.

Most of the Venetian bridges are made of stone (about 300), 60 of them are made of iron and 57 bridges are made of wood. Among the wooden ones one finds the Academia Bridge which also crosses the Canal Grande and offers a great view on the Canal itself and the Chiesa della Salute (Health Church). I often make the most of this view as background for my shots during my photo walks in Venice with couples on wedding or honeymoon holidays.

The Rialto Bridge was once a pontoon bridge made of wood. The one you see today was built in the 16th century, is made of stone and hosts a central portico and a row of shops on both sides.

One more “must” in Venice is the Ponte dei Sospiri (Bridge of Sighs) which used to link the Doge’s Palace to the prisons. The name is due to Lord Byron’s suggestion that prisoners would sigh on this bridge while throwing a last glance to Venice before being taken to the prisons.

In the next post I will introduce some less famous bridges in Venice.

Have a look at several Venetian bridges in my photo shootings galleries.